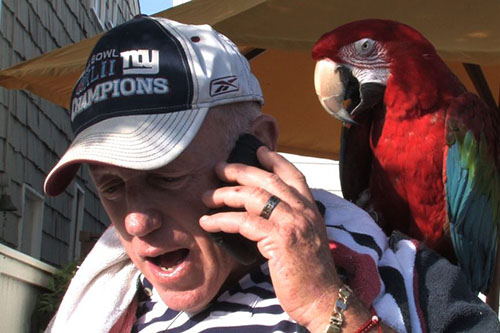 Renate, 2005, 30 min Antje Engelmann accompanies her aunt Renate on her journey along the stages of her life as a sex worker.

Renate is talking while having a coffee with her mother just as she will later in the brothel: about stepping out of the family reality into the unpredictable and unknown. The existance as a prostitute is becoming more and more normal to her. Her penetrative stories are told at the same speed as her vivid and haunted life. These monologues on original locations are here to catch the viewer and clarify the ambivalence of humanity and cruelty of life in the red light milieu. Without bitterness or resentment Renate is showing herself as an embodiment of the “love for sale” business: She is a survivor. But a life in which bodies are sold for money leaves marks, “a peace of soul is dying every day”. Her authentic presence and down to earth attitude which is reflected in her language reveals the past and pulls us into the present, into reality. An old friend, a pimp, find words for this reality. It is: razor sharp – like love and hate. Wie Wann Wo Warum, 2007, 15 min 12-year-old Laurin is accompanied to the vet where she has her sick hamster put to sleep. The following cremation of the hamster in the local woods shows Laurin’s grieving. Point of No Return, 2015, 40 min Based on the structure of a travelogue, Engelmann samples documentary footage from her private archive and the Internet and combines these with her own texts to form a multi-layered filmic essay. In addition to her own voice, audio recordings can be heard from the Golden Record, which NASA sent into space on the Voyager 1 and 2 spacecraft as a message for extraterrestrial life. During her travels from New York to Los Angeles, Engelmann encountered the natural forces of the prairie, birds, and man: here is the biologist and genetic engineer whose mission it is to genetically encode and bring back to life the passenger pigeon, which was eradicated by settlers in the nineteenth-century. Here is the ex-bodybuilder from Muscle Beach in Venice who just barely escaped a deadly lighting strike with his parrot and who talks about the expanse of the cosmos. Here is the Beat poet who tells about the Indians, psychoactive cacti, and shamanistic rituals and who writes about the passenger pigeon in his last novel. And here she is herself as expectant mother. Engelmann repeatedly hits upon iconic images of various forms of knowledge. Countercultural utopias, the first photographic view of the “whole” world – The Blue Marble –, Martha, the last passenger pigeon, the Kuksu dance, and the earth’s physical stresses are contained in the film, which defies all current genres. Point of No Return is a work about extinction and reanimation, death and birth. The complex montage of material and ideas is an oscillating search from microcosm to macrocosm and back again. Antje Engelmann (*1980 in Ulm, Germany) lives and works in Berlin and Los Angeles.

She has been awarded numerous prizes and grants, including a DAAD grant, a Stiftung Kunstfonds working stipend and the Karl-Schmidt-Rotluff stipend, and was guest professor at the Art Center College of Design in Pasadena, California from 2012 to 2013. Engelmann is represented internationally with her multimedia work and has exhibited at Paço das Artes and MIS Museu da Imagem e do Som in São Paulo, at Kunsthalle Luzern, ZKM, Center for Art and Media in Karlsruhe, Kunstverein Heidelberg, Kunsthalle Düsseldorf and the Berlinische Galerie.