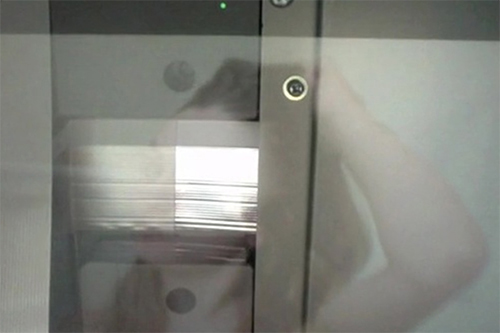 we celebrate the release of the new Videoart at Midnight Edition

Raphaela Vogel's title encapsulates both the playfulness and the agenda of this work: it alludes to a psychological state, but also suggests an authorial, ennobling condition for a woman – the German “Gräfin” translates as countess.

A female figure in a darkened room, who seemingly shoots herself from below, swiftly dabbles with what seems to be a common flatbed image A3-scanner device. Is that still her, the countess, whose visage we see on the scanner screen – or is it the reflection of a video rendering? Or is she maybe instantaneously scanning the video scan? Is the video scanning the film scanning the psycho-countess-self scanning?

The very (im)mediate mirror effect which structures Psychogräfin recalls a celebrated formula by Rosalind Krauss. In 1976, her own experience with video urged her “towards the psychological model” and gave rise to the central question: “The medium of video is narcissism?”

Vogel demonstrates here a rather solipsistic, quasi-meditative conceptual source of an otherwise expressionist praxis, which manages to show that a pastiche-like, self-reflexive feminist media work can be conceptual nowadays.

Incidentally, it happens that the noble title “Gräfin” probably derives from the byzantine-grecian γρᾰ́φειν (graphein, „to write“). Working with a continuous bracketing of the artist’s image via a very original (pseudo) amateur-like, bricolage tactic, Vogel operates on the very immediacy of a given technology. – Elena Zanichelli

Raphaela Vogel (b. 1988 in Nürnberg, Germany) lives and works in Berlin. After her studies at the Academy of Fine Arts Nürnberg and at the Städelschule Frankfurt, she was a scholar at De Ateliers in Amsterdam. In Spring of 2015, she held her first solo exhibition at Bonner Kunstverein, Bonn. In 2018 she had her first international solo show at the Kunsthalle Basel and presented a vast Installation at Berlinische Galerie for Videoart at Midnight Festival '18. With her exhibition "Bellend bin ich aufgewacht" Raphaela Vogel will be one of the youngest artists in the history of Kunsthaus Bregenz (19 October 2019 – 6 January 2020).

As a curator Wulf Herzogenrath has made a crucial contribution to the establishement of video art in Germany. In his archive, which is partly held by the Archives of the Akademie der Künste, highlights of video art and sculpture since the 1960s can be discovered, as well as written material, documents, sketches, photographs and his legendary artists' guest books, which have followed the artistic producion and the history of video art to this day. The exhibition Magic Media – Media Magic, from 12 September to 13 October at Pariser Platz, provides insights into this archive and shows among others Vito Acconci, John Cage, peter campus, Rebecca Horn, Joan Jonas, Bjørn Melhus, Nam June Paik, Ulrike Rosenbach and Bill Viola as well as the following artists of the Videoart at Midnight Edition: Klaus vom Bruch, Mathilde ter Heiijne, Marcel Odenbach and Raphaela Vogel.

Wulf Herzogenarth collects the Videoart at Midnight Edition since its beginning in 2006 and donates the works to the Archives of the Akademie der Künste.