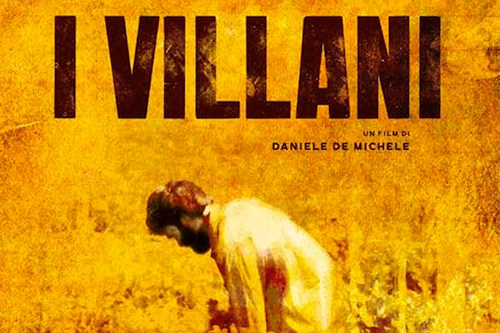 WIN a dinner for two at the Restaurant Fabbrica del Gusto!

Sunday 24th at 5:30 p.m. I VILLANI/ The villains   ( Scroll Dowon for the Italian description)
I 2018, R: Daniele de Michele, 84 Min, OmeU
At the end of the film: SPECIAL Aperitivo with Products d.o.p. direct from Apulia  from Cheese Factory Murgella DOP  + Debate with director Daniele de Michele, aka #Donpasta, Italian dj-cook, ecologist and gastro-philosopher.

I VILLANI/ THE PAESANTS: The film follows the lives of four characters, four "peasants" talking about agriculture, fishing, farming, cheese-making and family cooking. In their daily lives, these four characters portray the countless forms of opposition to adopting the same culinary and cultural model worldwide.

The film follows the lives of four characters, from sunrise to sunset, from the start to the end of their working day.

Four "peasants" talking about agriculture, fishing, farming, cheese-making and family cooking. In their daily lives, these four characters portray the countless forms of opposition to adopting the same culinary and cultural model worldwide.

Idea "These people told me about their way of life, their relationship to the land and the history of the place where they were born.

The deepest essence of Italian cooking was expressed in this delicate - at times ironic, other times painful - interweaving of private stories about their lives and their way of cooking with expertise, intelligence and attention: its being wise, tasty, sparing, respectful of the products of the land and the sea.

These people and each of their confident routine actions showed me to what extent modernity stood in radical opposition to that culture, and how that opposition aimed at the very core of the issue.

In order to eat well, one must respect the importance of timing in cooking, as well as the seasons, the land and the sea - something that no longer happens in modern times.

This results in conflict, an act of resistance, a bid for a new way of living which, despite being rooted in the past, becomes relevant and vital.

During the past 15 years of my career, spent creating books and shows that would combine cooking and art, I have been the narrator of my own investigation: in other words, I have expressed my point of view as to what cooking means to me.

What I found very moving and would like to share with you is that people actually do exist who are truly able to create and recreate every single action and turn it into a wealth of living, breathing knowledge. The fact that they exist overrides further considerations on my part. My intention is to look at them closely so that my ideal needs - which have a political basis - may meet their daily actions, gestures, places, faces and words. Documentary cinema is the tool that allows me to make this encounter take place: without renouncing my perspective, but letting it "inhabit" their lives. For this reason, the film is the result of long-lasting research. Now I finally want to be able to spend some time with the people that this long research allowed me to discover. It is as if so far I had only had a quick taste and a brief encounter. Now I feel I want to be with them and together develop story-telling and meaning, within myself and towards the audience."

Daniele De Michele has worked in television and radio. In 2014 he published Artusi remix(Mondadori), resulting from a collaboration with Casartusi's Scientific Committee. He has curated the Treccani and "Corriere della Sera" web-tv series entitled Le nonne d'Italia in cucina, a journey through Italy's 20 regions, meeting grandmothers in their kitchens. His first project, Food sound system, was turned into a book, published by Kowalski, and a multimedia show, which has been touring the world for 10 years. In 2009, this was followed by Wine Sound System, also published by Kowalski, translated into French in 2011. Two years later, he released his third book: La parmigiana e la rivoluzione. He has been a regular contributor for la Repubblica, Corriere della Sera, Left and has collaborated with Alias and Fooding. Screenplay : Daniele De Michele and Andrea Segre Cinematography Salvatore Landi Editing Donatella Ruggiero Music Marco Messina and Sasha Ricci Sound Luca Ranieri Production Malia contact Producers Giorgio Magliulo and Alessandra Acciai co-producers Antonio Badalamenti and Davide Nardini in collaboration with Rai Cinema in association with Evernex Italia Unipol Banca Blumax