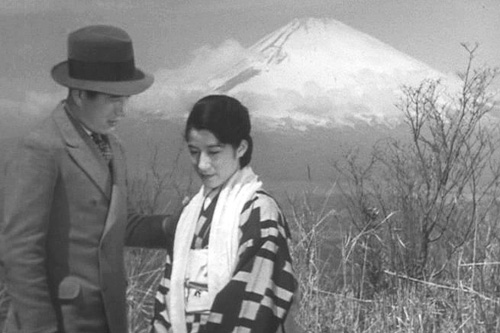 Mikio Naruse’s final silent film is a gloriously rich portrait of a waitress, Sugiko, whose life, despite a host of male admirers and even some intrigued movie talent scouts, ends up taking a suffocatingly domestic turn after a wealthy businessman accidentally hits her with his car.

Featuring vividly drawn characters and bold political commentary, Street Without End is the grandly entertaining silent melodrama with which Naruse arrived at the brink of the sound era. Naruse quotes the Lubitsch film “Smiling Lieutenant” within “Street Without End.” --- “It’s a fascinating bit of film-within-a-film, especially as we see the crowd’s reaction, watching with almost grim seriousness as Maurice Chevalier and Miriam Hopkins (Trouble in Paradise) comically flirt and fuss with each other on screen.” (criterioncast.com)

“The pleasures of ‘Street Without End’ are myriad. The street shooting alone remains an indispensible document of 1930s Japan. The neon lit buildings, the electric power lines, the new trains and new fashions serve as backdrops and signifiers for a changing society.” (jfilmpowwow.blogspot.com)

About director Mikio Naruse: “A prolific director of domestic dramas, … he ranks alongside Kurosawa and Ozu as a Japanese master” (theguardian.com)