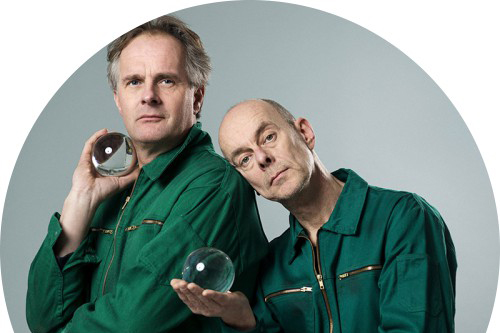 Bigert & Bergström is an artist duo living and working in Stockholm, Sweden and from time to time in Berlin. Eintritt frei | admission free

They met while at the art academy in Stockholm in 1986 and have collaborated ever since. Through their career Bigert & Bergström have produced and created art ranging from large-scale installations to public works, sculptures and film projects. Often with a conceptual edge, the core of their work is placed right in the junction between humanity, nature and technology. With energetic curiosity their art investigate scientific and social topics discussed in contemporary society. Bigert and Bergström will show:

The Weather War, 2012, 58 min
The Weather War is a documentary/art film about man’s attempts to control the weather and harness it for his own purposes. In a blend of land art performance and road movie, artist duo Bigert & Bergström travel to the US tornado belt with their special machine-sculpture, the Tornado Diverter. The goal: To stop a tornado. Along the way, we see historical examples of how the science of meteorology developed in symbiosis with military goals and how these visions evolved into modern ideas of geo-engineering. Controversial ideas with socio-political consequences, spotlighting the big question of who is really entitled to modified weather.
In a larger perspective, the film features the problems faced worldwide due to global climate change. How do we behave to meet those challenges? Do we adapt? Or do we wage war against increasingly aggressive weather phenomena? Bangladesh is building protective walls against coming floods. China shoots rockets into threatening clouds. And in Italy, anti-hail cannons are fired to protect the year’s wine harvest.

Rescue Blanket for Kebnekaise, 2015, 12 min
In 2015 Bigert & Bergström conducted a geo-engineering performance on top of the highest mountain peak in Sweden. A 500 sq. m reflective golden cloth was deployed on the mountain’s south peak. In the past few decades, the south peak, mainly consisting of a glacier, has been melting due to a warmer climate. Now the rocky north peak threatens to take over as the highest point in Sweden. By the end of the summer 2014, the south peak was measured at 2097.7 m – just 0.7 meters higher that the rocky north peak. Every day up to 100 people climb the south peak and the question is what will happen if they aim for the north peak instead. Reaching the north peak is much more difficult and will probably result in more serious climbing accidents. The performance was inspired by the attempts to halt the melting of the Rhone glacier. Every summer, large areas of the glacier are covered with reflective cloth, which has successfully saved 3 meters of glacial ice every summer. The film Rescue Blanket for Kebnekaise document the artists attempt to save the melting mountain top.