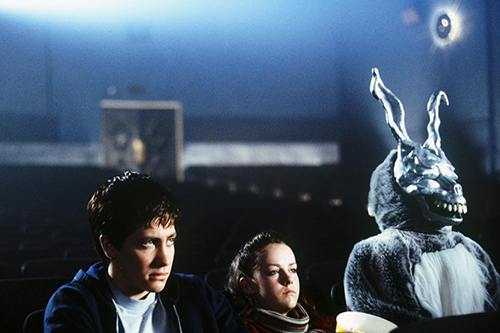 MOBILE KINO joins BABYLON for a limited series of DONNIE DARKO screening in the Studio Kino.

Studiocanal is the iconic film distributor releasing the cult sensation from 2001 back on the big screen. Donnie Darko will receive a special cinematic re-release including a 4K digital restoration to take home on Bluray.

In 2001, the now-iconic film was released and took audiences down a rabbit hole so deep it’s been twenty years and we still don’t know what the film is all about. The indie hit sparked curiosity and resonated with ‘90s kids who were now teenagers at the beginning of a new millennium. The film gave a voice to the awkward teenager and put a spotlight on the struggles of mental health and medication.

The whole experience was brought together with a hit soundtrack featuring Joy Division, Tears for Fears and Echo & the Bunnymen. The Gyllenhaal siblings lead a cast with a line-up of actors making hilarious and memorable cameos. Drew Barrymore is the understanding high school teacher, Seth Rogen is high school bully and Patrick Swayze as the demonic life coach.

Two decades after the release we bring it back to the big screen and try to make sense of the mad world of Donnie Darko. Join one of the screenings and find some answers or simply dive back down the rabbit hole to get lost on the trip one more time.

"Donnie Darko is a little bit too weird for his quiet, safe, upper-middle-class American neighbourhood. He's also stopped taking his medication. The sleepwalking, awkward teenager thinks the world is going to end in 28 days and his imaginary friend keeps getting him into trouble."