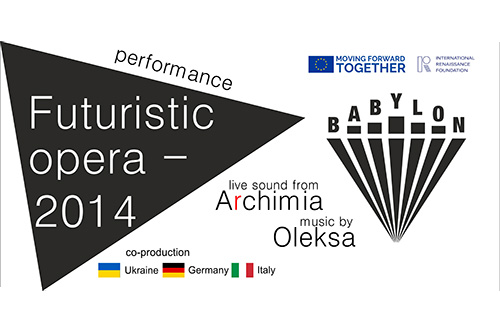 "Futurism" - it's not just a word. You can find it in each part of the performance, acting, scenography...
"Futuristic opera - 2014" - the second performance in this genre. The first one was "Victory over the Sun" in 1913.

The story told in the play is cyclical (it was before, it is happening today) and any military action affects not only geopolitical processes, but also brings misfortune and devastation to the homes of ordinary people.

The "Futuristic opera - 2014" is a tragic story of one family, whose visitors one day become a night patrol with weapons.
The Teatrok had created in 2015 in Odesa, based on the creativity of Oleksa (Ukrainian composer and stage director).

Music from the performance, performed by the string quartet "Archimia":

This publication was produced with the support of the European Union and the International Renaissance Foundation within the framework of the EU4USociety
project.

Its contents are the sole responsibility of of the authors and do not necessarily reflect the views of the European Union and the International Renaissance Foundation.