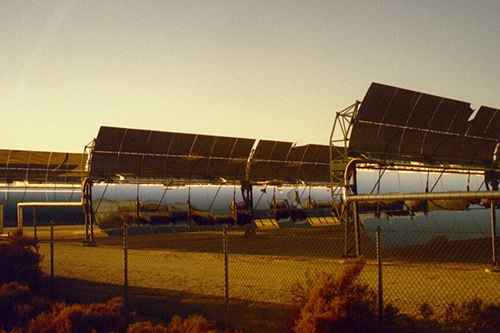 on the occasion of the Berlin Art Week 2022 and the celebration of the Award for Artistic Project Spaces and Initiatives 2022 by Berlin Senat Department for Culture and Europe we are thrilled to welcome Rosa Barba, who in her work repeatedly explores the concept of an anarchic organization of cinematic spaces – a working principle that aims to form a new way of thinking by destabilizing outdated structures of cinema – on a journey to an imaginary political trope for the cinema of the present day.

Time as Perspective, 2012, 12:06 min
“Time as Perspective” was shot in the Texan desert and shows huge oil pumps constantly repeating all the same mechanical movement. Beside their meditative sculptural quality in the landscape, the film touches on social and political issues with its references to exploitation of natural resources. The point of time of the film, set in the the vast and arid landscape of the desert with its seemingly endless perspective, is unclear and could be a futuristic vision or a historical document. The drilling pumpjacks run in loops – the symbol for progress and exploitation has been reduced to their mechanical repetitive rhythm. They move but never change, a monotonous labor that invokes consistence. No progression – just movement that becomes monumental. The oil fields with the thousands of pumpjacks are printing invisible repetitive patterns into the earth – or onto the film. Their “writing” remains hidden as it seems to travel to another level. But it also points to the term “Peak Oil” as the moment when the maximum rate of petroleum extraction is reached.

Outwardly from Earth’s Center, 2007, 23:39 min
“Outwardly from Earth’s Center” is built on the narrative of a fictitious society on an unstable piece of land in danger of disappearing. This situation requires the population’s collective initiative in order to secure each individual’s survival and the society to remain. The concept has a certain background in reality since Gotska Sandön moves approximately one meter a year. The fictitious report of experts strengthens the surrealistic atmosphere that in a creeping way offsets the experience of what perhaps is first considered a beautiful documentary towards a more abstract and slightly absurd picture of people’s struggles and vulnerability.

The Long Road, 2010, 6:14 min
The 35mm film The Long Road was filmed in the Mojave Desert and pursues Barba’s previous investigations of the undercurrents of textual and visual narratives. Historical traces of the recent past, as markers of past actions, open up the discordances of naturalized environments. The Long Road delineates its hidden tracks in the constant ambiguities of the landscape’s functional and aesthetic qualities: Viewed from above, the oval of a road – a loop without a finish line – inscribes itself into the landscape as if it were a sign. The film scrutinizes a huge provisional racetrack  once a site of time-sensitive activity, this particular racetrack, no longer in use, is gradually being absorbed back into its dusty environment. The rupture between past and future is accompanied by a double-stranded soundtrack with music by Jan St. Werner and a reading of Robert Creeley’s eponymous poem by the author himself.

Aggregate States of Matters, 2019, 21:14 min
Shot in the Andes, the 35mm film deals with the increasing impact of climate change on remote areas. At its core, the film pivots on the ambivalent negotiation between the binary idea of nature and culture, oscillating within the contemporary discourse on the environment and its complex layers based on scientific, philosophical, spiritual and cultural approaches. The work shows the blurring boundaries between human and non-human actors in communities affected by glacier melting in the Andes. From an extensive dialogue with the local people, Barba draws a critical picture of a world where progress has stopped making sense.

Rosa Barba is an artist and filmmaker based in Berlin balancing conceptualism with a distinctly personal vision in her work. She merges films, sculptures, installations, live-performances, text pieces, and publications that are grounded in the material and conceptual qualities of cinema. She also creates installations and site-specific interventions to analyse the ways film articulates space, placing the work and the viewer in a new relationship. Her work has been exhibited internationally at prestigious institutions and biennials worldwide including Neue Nationalgalerie, Berlin (2021/2022), Cukrarna, Ljubljana (2022), Museo Reina Sofia, Madrid (2017), the 56th, 53rd, 52nd Biennale di Venezia, Italy and the 7th Beaufort Triennial, Belgium. In 2020, Rosa Barba was awarded the Calder Prize by The Calder Foundation. Her work is part of numerous public and private collections and has been widely published, most recently in her monographic book Rosa Barba: On the Anarchic Organization of Cinematic Spaces – Evoking Spaces beyond Cinema (2021).