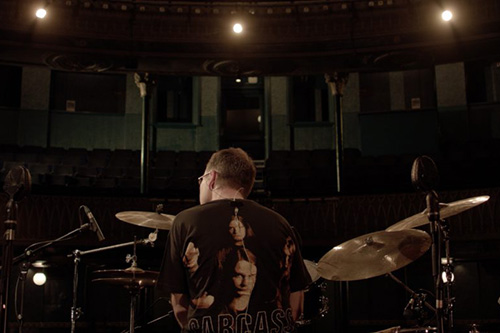 For the Liverpool Biennial 2018, Ari Benjamin Meyers created a series of musical compositions that form the basis for film portraits of four musicians from Liverpool, or with musical ties to the city: Bette Bright (Deaf School), Budgie (Siouxsie and the Banshees/Big in Japan), Ken Owen (Carcass) and Louisa Roach (She Drew The Gun). The films reference the subjects’ personal histories and tell Liverpool’s musical history, representing its major musical movements while at the same time relating back to the city’s industrial past.

This is the artist’s first film-based work. It was premiered and exhibited on the stage of the Playhouse Theatre and now edited especially for Videoart at Midnight. The four films are played back with varying amounts of overlap to create a meta-composition and a dialogue between the performers.

Four Liverpool Musicians (Bette, Budgie, Ken, Louisa), 2018 Three channel video, 52:10 min Ari Benjamin Meyers (b. 1972, New York, USA) lives and works in Berlin, Germany. Meyers received his training as a composer and conductor at The Juilliard School, Yale University, and Peabody Institute. His works as an artist, such as Symphony 80 and Solo for Ayumi (both 2017), explore structures and processes in music composition and relationships between performer and audience. His diverse practice includes creating musical performances for the stage and exhibition spaces.

He has collaborated with artists such as Tino Sehgal and Dominique Gonzalez-Foerster; bands including Einstürzende Neubauten and Chicks on Speed; and classical ensembles like the Bavarian Radio Symphony Orchestra and the Hong Kong New Music Ensemble.

Meyers also appeared in and composed the music for Anri Sala's "1395 Days Without Red", which we showed in 2014 as part of Videoart at Midnight.