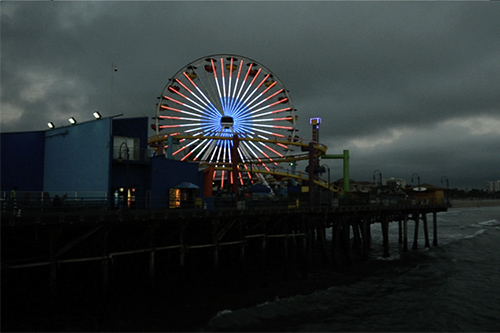 Videoart at Midnight partnered up with Villa Aurora & Thomas Mann House to present a selection of Sonntag’s video and sound compositions.

The RAUSCHEN Box is published by Merve and contains a vinyl record with the two compositions, RAUSCHEN (2015) and PACIFIC NOCTURNE (2013) plus an edited volume of pictures and essays. The Berlin-based artist, composer, and theorist Jan-Peter E.R. Sonntag (b. 1965 in Lübeck, Germany) associates the fine arts, new music, and media aesthetics in his artwork, which is usually of installative nature. Videoart at Midnight's cinema setting will be an exceptional performance of is work. Sonntag studied art, art history, composition, philosophy and cognitive sciences. His mostly spatial works are shown and performed worldwide. He was a fellow of the Akademie Schloss Solitude and Villa Aurora. Since 2013, together with Sebastian Döring, he has published the circuitry notations for Friedrich Kittler “Gesammelte Schriften”. In 2015 he was invited for his mid-career retrospective RAUSCHEN at the Württembergischer Kunstverein in Stuttgart. In 2017 documenta 14. commissioned RUNDFUNK AETERNA – A RADIO OPERA. PROGRAM B², 2111/2014 HD video, 2 channel sound, 2 min. loop PACIFIC NOCTURNE, 2012/2018 An audio-visual composition for 2 crickets, motorbikes on the sunset boulevard, planes over the bay, the cinema organ of the Villa Aurora in the Pacific Palisades during and after the sunset and the moving images of the Ferris wheel of the Pacific Park on the pier of Santa Monica. BOO84, 2016-2019 (Premiere) HD video based on NTSC Footage, two-channel sound/composition for British Brassband, 4 min. SUNDOGS, 2011/2012 HD video, two-channel sound/composition for piano, strings, horns, double bass and granular synthesis, 24 min. Featuring a live music performance by Jan-Peter E.R. Sonntag (trombone) and Lars Gühlke (double bass) TRISTAN, 2012-2019 (Premiere) HD video, two-channel sound/composition for the cinema organ of the Villa Aurora and live the cinema Organ of the Babylon Kino, 15 min. Featuring a live music performance by Anna Vavilkina (Babylon cinema organ) 612.43WEISS, 2003-2006/2010 HD video, two-channel sound, 24 min. Please find the detailed program on our web site: www.videoart-at-midnight.de Wir freuen uns Euch zu sehen | we are looking forward to seeing you Herzliche Grüße | best regards Olaf Stüber, Ivo Wessel