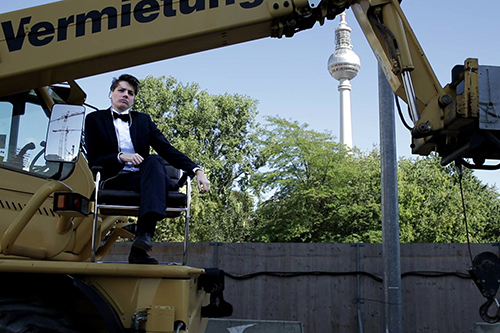 Deploying video, performance, and installations in her artistic research, Kerstin Honeit examines hegemonic image production within the media of information technology and pop culture. Intervening at the boundaries of representation and reception, she questions the construction of social norms.

Since 2017 the Giant Panda Bears Meng Meng and Jiao Qing were hired out to the Berlin Zoo from China to attract more visitors and to therefore increase profit. Unfortunately for the Berlin Zoo this PR campaign did not work out as planned – in fact it worked backwards. Meng Meng, the female Panda will only walk backwards – possibly protesting the fact that she was abducted and is kept in captivity.

But instead of rethinking the problematic concepts of zoos in general, international media is taking on a different debate: blaming Meng Meng’s behaviour on the fact that she has not bred yet and is just looking for attention. Kerstin Honeit’s video aligns Meng Meng’s protest with other performances of protesting bodies using movement in public space to address grievances.

‘my castle your castle‘, tackles the debate about rebuilding the Berliner Stadtschloss, the former royal palace in the centre of Berlin, over the foundations of the Palace of the Republic.

Artist Kerstin Honeit invites two building workers who were deeply involved in the construction or demolition of the Palace to take part in a discussion resembling a TV chat show held on the site. This is partly an allusion to the fact that the large building site resembles a stage, a platform used by a broad range of participants and stakeholders. At the same time, this reference is undermined and caricatured by a musical interlude performed by two queer cowboys. The palace, described as an emblematic structure that will restore identity to a nation, is turned into a space occupied by new actors whose voices are otherwise drowned out of the debate.

In ‘Talking Business’ two lip synchronisers meet again after 30 years. They had both used their voices to dub iconic figures in the TV series Dynasty, popular in the 1980s. In an intricately edited sequence – the video also exists as a 3-channel installation – Honeit illustrates the conflicted relationship between voice and embodiment, between women’s views of themselves and their representation (in the media).

Pigs in Progress was triggered by the processes of gentrification that are forcing long-standing residents out of many neighbourhoods in Berlin. At the same time wild boar have been staking out their territory by intruding into front gardens in the wealthy outer boroughs of the city. Honeit entwines an interview with an (illegal) feeder of wild boar in the forest of Grunewald with original recordings of outraged middle-class residents alongside activists from the tenants’ campaign group Kotti & Co in Kreuzberg. She then stages a performance among the forest animals.

Möhrenstrasse, 23:00 (2008) in collaboration with JB Rathke_Justin Time,15:00 min Two rabbits rename the underground station and street signs in ‘Mohrenstraße’ (‘Blackamoor Street’) in the Mitte district of Berlin at night.

’A Dirndl, A Poodle – A Trauma’ is a docu-drama revenge story. Based on footage from the family Super8 archive (filmed by the Honeit’s uncle in the 70’s), the film deals with a childhood trauma involving the family poodle. Kerstin Honeit lives in Berlin and studied fine art and set design at Kunsthochschule Weißensee in Berlin.