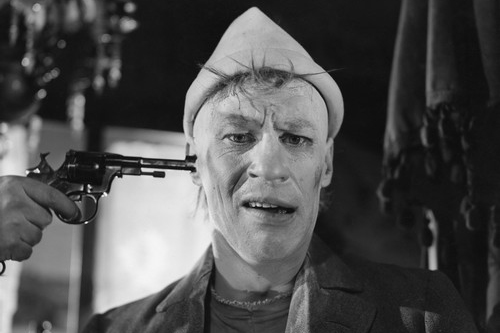 This rich, powerful Ingmar Bergman film charts the frustrations and humiliations of several circus performers. The circus's portly owner, Albert, recalls a humiliating incident involving the company's clown, Frost, who discovered his wife, Alma, swimming nude before a band of cheering soldiers. Having concluded his recollection, Albert visits his estranged wife, Agda, who realizes that he has made little money with his circus endeavor.

While Albert endures the humiliating encounter with his wife, his jealous mistress, Anne, retaliates by yielding to a seductive local actor, Frans, then realizes that she has been exploited and debased. Later, the drunken Frost informs Albert of Anne's sexual indiscretion, whereupon Albert determines to thrash Anne's cynical lover. In the ensuing altercation, however, Frans manages to thwart Albert's bullish attacks and deliver a series of punishing blows. Beaten and degraded, Albert ponders suicide, then decides to avenge himself on unfaithful women by killing the company's bear, beloved by the provocative Alma, whose betrayal of Frost has so haunted Albert. Following the bear's demise, the company departs to another town.

Gycklarnas Afton is full of powerful performances and staggering sequences, including the legendary flashback in which Frost finds his wife cavorting nude before the soldiers. In this scene, played with almost hysterical intensity, Frost, dressed as a clown, tearfully carries his nude wife from the water, past the soldiers, and back to the circus tent. The soundtrack's jarring contrast between sheer silence and a blaring brass band, coupled with the black-and-white cinematography's emphasis on glaring sunlight, generate a mood of considerable tension and unease.

This extraordinary scene ranks among Ingmar Bergman's greatest feats and readily establishes Gycklarnas Afton as an unflinching examination of the human condition.