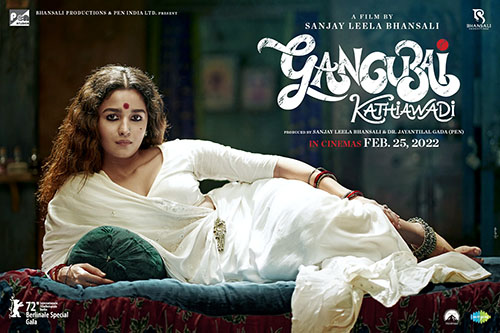 Gangubai Kathiawadi is a film based on the book “Mafia Queens of Mumbai” written by S. Hussain Zaidi and Jane Borges. The film celebrates the rise of a simple girl who had no choice but to embrace the ways of destiny and swing it in her favor. The narrative walks through the life of young Ganga, who ran away from her small town of Kathiawad to pursue her dreams of becoming a movie star. As fate would have it, her lover betrayed her and sold her off to a brothel. Ganga was left with no choice but to survive in these dire circumstances.

With time, Ganga marks her territory and transforms into Gangubai – the matriarch of Bombay’s infamous red-light district – Kamathipura. Gangubai takes it upon herself to become a symbol for the fight against the injustices imposed on prostitutes. She becomes the voice of the suppressed and makes it her mission to try and legitimize a tainted profession that dates back to ancient times.
With a promise to make one and all feel inspired in 2022, Gangubai Kathiawadi is a story that proves that all it takes is one voice to help awaken hundreds. One voice to remind people that everyone deserves equality and respect no matter what; their gender or profession is.

Sanjay Leela Bhansali is an Indian filmmaker, screenwriter, music composer, editor, producer. His films celebrate the Indian way of life and are culturally rooted. He translates his story telling with striking imagery mounted on epic scale.

In a career spanning across 3 decades, he has been conferred with numerous awards for his body of work. SLB has been awarded the national award five times. In 2015, he was awarded the Padma Shri, fourth highest civilian award of India for his contribution to Indian Cinema.

Devdas, an adaptation of renowned author Sarat Chandra’s novel  won over both audiences and critics. The film premiered at the Cannes Film Festival in 2002. In 2003, it was nominated for the BAFTA as the Best Foreign Language Film. It was featured twice by Richard Corliss in the Time Magazine, once on number 4 in “Top 10 Everything in 2002” and ranked eighth in “The 10 Greatest Movies of the Millennium”

Black, inspired by the life of Helen Keller starring Amitabh Bachchan and Rani Mukerji, ranked fifth in Time (Europe)'s "10 Best Movies of the Year 2005" amongst films from across the world.

In 2008, Sanjay Leela Bhansali directed the opera Padmavati, an adaption of the 1923 ballet written by Albert Roussel. The first show premiered in Paris at the prestigious Théâtre du Châtelet and the next at the Festival dei Due Mondi.

Since 2010, Sanjay Leela Bhansali has been composing music for his own films. In addition to being on popular music charts, it has also won him a lot of appreciation and hearts. And in 2019, he was felicitated with national award for the best music for his film Padmaavat.

He diversified into film production under the banner Bhansali Productions and has several popular films to his credit.

2021 marks 25 years of his film making and Gangubai Kathiawadi, his 10th directorial, is slated to release in February 2022.

A glimpse of his journey of 25 years: