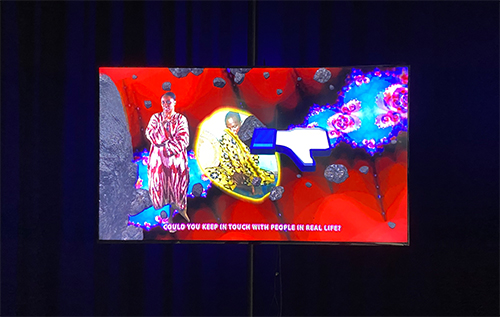 Following the show and conference this special screening event further illuminates Activist Neuroaesthetics in recent video art. Activist Neuroaesthetics refuses the cynicism of Big Data, neural consumerism and defence research generated technologies, and instead promotes an ethics of neural plastic emancipation and neural diversity to produce artistic facts, rather than scientific ones, that are organized into a generalized paradigm of resistance. This event extends the three-part Activist Neuroaesthetics exhibition (Brain Without Organs, Sleep and Altered States of Consciousness, and Telepathy and New Labor) that took place at Kunstverein am Rosa-Luxemburg-Platz e.V. earlier this year in celebration of the 25th anniversary of artbrain.org. The screening also augments and supports the Activist Neuroaesthetics Conference that took place in collaboration with Saas-Fee Summer Institute of Art publications, developed by lead institution Kunstverein am Rosa-Luxemburg-Platz e.V. along with various local partners that has been taking place online and at different venues on Rosa-Luxemburg-Platz in Berlin over the course of 2021.

Activist Neuroaesthetics in Video Art is curated by guest curator of Telepathy and New Labor, Jacquelene Drinkall. This project is also made possible with support from Hauptstadtkulturfonds, Stiftung Kunstfonds/Neustart, Kunstverein am Rosa-Luxemburg-Platz e.V., and private donors. This project is supported by the NSW Government through Create NSW (Australia).

Tabita Rezaire, “Premium Connect”, 2017, 13:04
Premium Connect envisions a study of information and communication technologies (ICT). It explores African divination systems, the fungi underworld, ancestors’ communication, and quantum physics to (re)think our information conduits. Embracing the idea that ICT acts as a mirror for the organic world capable of healing or harming, depending on its usage and users, Premium Connect investigates the cybernetics spaces where the organic, technological, and spiritual worlds connect. How can we use biological and esoteric systems to fuel technological process of information, control, and governance? Overcoming the organism/spirit/device dichotomies, this work explores spiritual connections as communication networks and the possibilities of decolonial technologies.

Gabriele Stellbaum, "Let The Silence Rest", 2019, 6:18
Somewhere in the not too distant future, when jobs have lost meaning and fulfilment is the key to enlightenment: two guards in a data center are struggling to elevate their boredom into higher awareness. Meditation and AI coaching frame her days, while he escapes into mind control and aspires to become a telepathic player. A forbidden fence reminds us that the future might not be all that bright after all.

Jacquelene Drinkall, “Data Centre Seance: Titanpointe”, 2016-2017, 7:09
’Data Centre Séance’ captures a collaborative psychogeographic focus on an austere data centre in Manhattan known as ‘33 Thomas Street’ and the ‘Long Lines Building’. This unusual Brutalist building was built in 1973-4 as a windowless concrete and granite fortress, strong enough to withstand a nuclear blast. Collaborative proxies of the artist Jacquelene Drinkall included the New York art collective Art Codex, a psychic, a hacker, and an Australian art critic for ARTnews. These proxies, together with some artist activists from ABC No Rio, braved a snow blizzard to execute the psychogeographic investigation of this building. This building had only recently been identified by Edward Snowden as the National Security Agency’s ‘Titanpointe’. The work demonstrates belief that public and psychic space want to be free, just as data wants to be free. Commissioned by Cementa Art Festival.

The Telepathy Project (Veronica Kent and Sean Peoples), “Dreaming the Collection", 2013, 8:09
In this work the act of dreaming serves as a metaphor and working methodology through which they explore alternate ways of being and communicating. For this project, the artists use works of art in the National Gallery of Victoria (NGV) collection as catalysts for a series of dreaming events. Seven works featuring sleeping figures will form the basis for seven nights’ dreams which the artists and guest performers will recount through scripts and performances. Drawing on ideas derived from Democritus, an ancient Greek philosopher who hypothesised that images emanated from material objects and could enter the pores of a sleeping person and directly influence their dreams, The Telepathy Project offer alternative interpretations of works in the NGV collection fuelled by the logic of dreams.

Benjamin Denham, “What is psychedelic art?”, 2020, 1:11 and “Interdimensional communication, transdimensional solidarity”, 2020, 3:18
The short videos introduce the work of Sound Site Academy, a school for anarcho-syndicalist witch-doctors. Sound Site Academy is an initiative of the Inner West Union of Anarcho-syndicalist Witch-doctors, based in the Cooks River Valley in the Inner West of Sydney. The Academy’s key media liaison officer is the fictional entity Bernie Dernheim. These videos were created in response to the Covid-19 pandemic as a means to deliver our course 'Foundations in Art, Ethics and Biology' to aspiring witch-doctors and other interested parties.

Shoufay Derz, “Ritual of Eels: Loving the Alien”, ongoing project since 2019, 5 minutes
This mesmerising video performance features uncanny video portraits of friends, family, acquaintances, and strangers who have taken part in Derz’s “eel ritual” . For the artist, the figure of the alien, conjured in the work’s title and her sitters’ green faces, stands as a metaphor for transformation and our shared unknowns. The potentials of disappearance and transformation are shared, mirrored between the landscape and green faces. Spanning a conversation on belonging, alienation and the potentialities of kinship with others and the natural environment, the work reveals rituals for the end of the world, so that we may collectively imagine other possibilities.

Sarah Breen Lovett, “Blue Body”, Guided Meditation, 2021, 5 minutes
Dr Sarah Breen Lovett is engaged in a combined practice of: academia, architecture, biophilia, contemporary art, curation and mindfulness. This practice is focused on deepening interconnectivity between ourselves and the environment around us. This has taken the form of landscape installations, socially engaged practices, participatory performances, digital video and voice recording. “Blue Body” is an extension of this practice, utilizing her mindfulness teacher training to create a voice work that sits between guided meditation and spoken word performance.

Michele Barker and Anna Munster, "évasion duet”, 2016, 6:18
Michele Barker and Anna Munster have collaborated for over twenty years. "évasion (duet)" is a 2 channel moving image and audio installation that restages Harry Houdini’s famous straightjacket escape. It works across dance, performance and the moving image with a Dickensian aesthetic. An escape artist seems to be breaking free from a straightjacket but the video (and/or installation) ‘traps’ him and the audience. It is the second iteration of a multi-channel video and responsive environment called évasion that was created in 2014.

Linda Dement and Nancy Mauro-Flude, "Awry Signals” (video version), 2015-2021, 5 minutes TBC
In some belief systems, it is said that deceased warriors first disappear beyond all visible horizons and then reappear in the firmament as multitudinous star clusters. Awry Signals is a homage to the radical lives of three great women: Ari Up of the Slits (1962–2010), Poly Styrene of X-Ray Spex (1957–2011), and Chrissy Amphlett of the Divinyls (1959–2013). It is our calculation that some of the light we see in the night sky comes to us from a time when all three were still alive. A direct beam of starlight Wi-Fi is now passing back through their last days, deaths and afterlives. This video documents a live computer code séance device as data heirloom that taps into a starlight beam that picks-up the WIFI transmissions as they travel to Alpha Centauri. The programming language Python is used to manipulate this and the text we ask Chrissy, Ari and Poly about their travels out to the firmament, their lyrics resonating on the earthly plane still guide us.
Haines & Hinterding, “Planchon Portal Future/Past 1.1”, 2016-2017, 13:29

In the centre of a small park near the station in Montpellier France, we were enchanted by a verdant dripping moss-covered boulder, spouting a fine mist of spray that seemed to have come out of nowhere. This remarkable object, the work of Denis and Eugen Buhler, landscape artists of the nineteenth-century forms the centrepiece of a park opened in 1858 and dedicated to the famous viticulturist Jules Emile Planchon.

In our work, the fountain comes to represent a singular moment of primeval nature, rising up out of the cultured space of the city like a hallucinatory portal that is signalling to numbered galaxies that exist across the micro and macro scales of the earth.  Pointing toward Science Fiction the work gathers together in a cinematic assemblage some of our abiding aesthetic concerns with geomancy, orgone, olfaction, energy scavenging and occult field recordings around the labyrinthine wilderness of the Blue Mountains. Shot in France, the Netherlands and the Blue Mountains, Australia, the work gathers moments from several locations and extracts from prior works to form part of a wider and ongoing fiction of sensation.