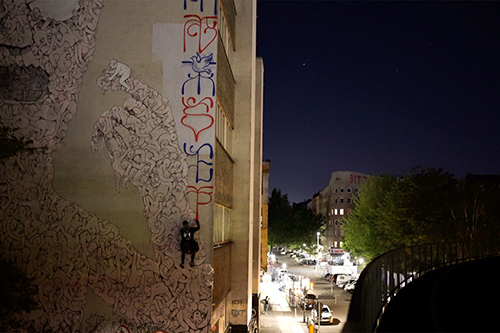 Spiritual letters is an independent documentary art movie made and edited by Mr. Paradox paradise.

The film is a story about the deep connection of the life and art of the artist.

It takes you on a journey through Berlin like you have never seen before.

Take a deep dive behind the scenes of the famous red and blue graffiti letterings that cover the heart of the city and tune into the connection between art, letters and spirituality.

In this 70 minute self proclaimed masterpiece, you have the chance to experience one of a kind stunts across the city's architecture, surfing on trains (on the well known Berliner U-Bahn) and drone shots full of adrenaline.

By putting himself into life-threatening situations, the artist is trying to pull a connection between art and life itself.

It is a spiritual experience where calligraphy imitates organic forms and speaks to the soul.

Being chased by his own feelings and thoughts about the vibrational structure of the world we live in, Paradox is focusing on spreading the "Message from Above".

To Reveal the Truth. To Awaken Humanity. To Open one's Eyes.

The film includes many different scenes, from self-made interviews to pure artistic film-making.

The aim of the film is to mimic the nature of the inner being flowing through the heart and mind of the artist.

With focusing on forms that build the lines of this individualized lettering system, the film is a symbolic step forward, where Mr Paradox Paradise drifts from the previous ´Fuck the System´ into a new path.

Rule-breaking is switched for art and a spiritual language speaking directly To YOU.

´Spiritual Letters´is an elevation towards Art and should be considered as a beginning.

What awaits the artist on his journey is Life, and Paradox is on an ever evolving path. Art has no limits. Enjoy. Surfs up.