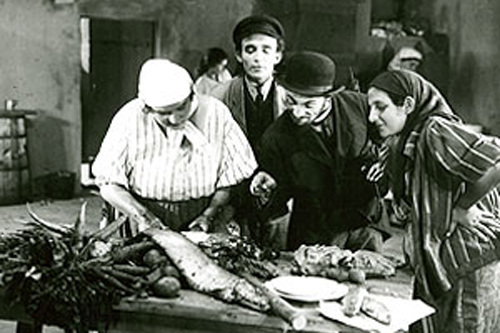 Jewish Luck was among the first Soviet Yiddish films to be released in the US during the 1920s. Based on Sholem Aleichem's series of stories featuring the character Menakhem Mendl (played by the famous actor Solomon Mikhoels) the film revolves around the daydreaming entrepreneur Menakhem Mendl who specializes in doomed strike-it-rich schemes. Despite Jewish oppression by Tsarist Russia, Menakhem Mendl continues to pursue his dreams and his continued persistence transforms him from schlemiel to hero as the film uncovers the tragic underpinnings of Sholem Aleichem's comic tales. Notes Village Voice critic Georgia Brown, "The movie's best intertitle translated from Isaac Babel's Russian: `What can you do when there is nothing to do?'"

A dramatized version of the Menkhem Mendl stories was first staged by the Moscow Yiddish State Theater, under the direction of Alexander Granovsky, who later made this silent film. Jewish Luck features some of the finest artistic talents of Soviet Jewry during this period. It has been speculated that the cinematography done by Eduard Tissé inspired the filming of certain scenes in one of his later projects, Sergei Eisenstein's The Battleship Potemkin (Particularly the famous "Odessa steps" scene of that film, the same setting as the Jewish Luck finale). The original Russian intertitles were written by Soviet Jewish writer Isaac Babel, who later became a victim of the Stalinist purges in the late 1930s.