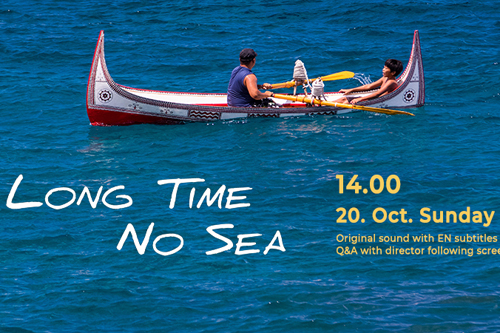 International acclaimed film >>Long Time No Sea<< discusses the cross-generation issue of the aboriginal group Tao, reflecting current problems of rural education in Taiwan. The film not only presents the spectacular scenery in the island Lanyu but it also delicately depicts an interdependent kinship between a grandfather and a grandson.

Manawei and his grandmother are living on the Orchid Island, where most of its 5000 inhabitants are Tao indigenous people. Day after day, Manawei has been waiting for his father who works in Taiwan, like most of the Tao people, can come home one day.

Manawei’s teacher Yo, who came to Orchid Island for the first year, organized a dance group that performed Tao village’s traditional dances based on Manawei’s story. Manawei and his classmates then went to Taiwan to complete in a national indigenous performance competition. Missing his father too much, he jumped into a river where reminded him of the old times they were surrounded by flying fish in the sea.

Shoot on the Orchid Island, the film is based on a true story that a Taiwanese teacher has taught on the island for a decade and forms a close bond with his students and residents. This film was awarded the Special Jury Prize of the Seattle International Film Festival 2019 and Si Pangoyod (Manawei) who never played in any movies before as other characters in the film, won the Best New Performer in the Golden Horse Award 2018.

Heather Tsui, has a wealth of experience in choreography and directing. In The Life Coach, she created over 200 documentaries on special guests; the original script for Long time no sea earned the GIO Excellent Screenplay Award in 2011, and the Domestic Feature Film Assistance Grant in 2014, which is released in 2018.