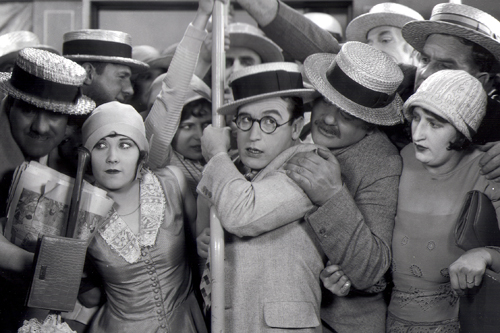 Speedy, Lloyd’s last silent film, is a superb valedictory to the silent era. “Speedy” was Harold’s real-life nickname (given to him by his father) and the film is appropriately fast-paced. Lloyd plays Harold “Speedy” Swift, a baseball-crazy young man who cannot hold a job. His employment misadventures include work as a soda jerk and a cab driver. Harold’s girlfriend, Jane, lives with her grandfather, “Pop” Dillon, who owns New York City’s last horse-drawn streetcar. A gang hired by a railroad monopoly steals the horse and streetcar. By stopping Pop’s streetcar from operating more than twenty-four hours, the rail monopoly hopes to steal away his franchise. Speedy ultimately finds the car and manages to get it back on track in time to make the daily run, saving Pop’s franchise. Filmed partly on location in New York, the film features a memorable cameo from baseball legend Babe Ruth and a wild chase scene in downtown Manhattan, where Harold must hurtle the horse-drawn streetcar pell-mell through chaotic city traffic.