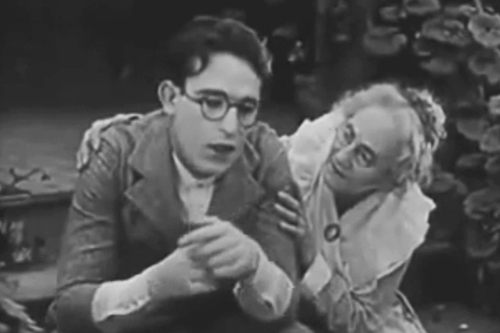 Harold is a cowardly young man who runs to his grandmother (Anna Townsend) out of fear when he is asked to participate in the manhunt for a tramp (Dick Sutherland) who has killed a man. The boy finds the courage only after his wise granny gives him a magic talisman that she tells him had helped his equally timid grandfather become a hero in the Civil War. Only after Harold single-handedly captures the killer does his grandmother tell him the truth—the talisman was a fake, nothing more than an old umbrella handle. Harold always had the courage inside him; he just had to find it for himself—a classic Lloyd lesson. The film ends with Harold ridding himself of a bully (Charles Stevenson) and proposing to his girl (Mildred Davis). The film’s brilliantly integrated plot and gags made Grandma’s Boy one of the most influential of silent feature-length comedies. Upon its release Charlie Chaplin called it “one of the best-constructed screenplays I have ever seen” and elements of the film can be seen in Buster Keaton’s masterpiece, The General (1926).