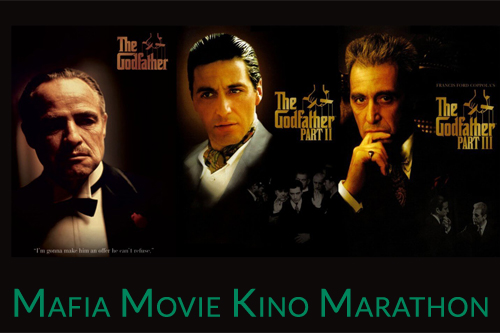 David DMP Moore and Babylon are making you an offer you can’t refuse: come to the DMP Mafia Movie Marathon and see The Godfather Trilogy the way they were made to be seen, plus three other mafia classics.

The Godfather
(1972) - Digitally Remastered, OmU The aging patriarch of an organized crime dynasty transfers control of his empire to his reluctant son.

The Godfather: Part II
(1974) - Digitally Remastered, OmU The early life and career of Vito Corleone in 1920s New York City is portrayed, while his son, Michael, expands and tightens his grip on the family crime syndicate.

The Godfather: Part III
(1990) - Digitally Remastered, OmU In the midst of trying to legitimize his business dealings in New York City and Italy in 1979, aging Mafia Don Michael Corleone seeks to avow for his sins, while taking his nephew Vincent Mancini under his wing.

The Goddaughter
(1972) - - Digitally Remastered, OV The only comedy/spoof on the lineup for this event. SUPER RARE sexploitation/nunsploitation crime film that directly spoofs the Godfather.

Baby Face Morgan
(1942) - Digitally Remastered, OV A young man's father, who lives in the big city, dies and his business associates bring his son to the city to take over his father's business. What the young man doesn't know is that his father was one of the city's biggest racket bosses and that he's being placed in charge of the gang's profitable shakedown operations, disguised as an insurance agency.

Lady Gangster
(1942) - - Digitally Remastered, OV An actress gets mixed up with a criminal gang and winds up taking the rap for a $40,000 robbery. Before she's sent to prison, she steals the money and hides it, intending to use it as a bargaining chip to win her release from prison. However, her former partners have other ideas.

Pillows, blankets, sleeping bags, and anything else to make you more comfortable in the kino is welcome!

Pay Once, Come & Go As You Like. Films, Times, Guests Subject To Change. No returns, no refunds