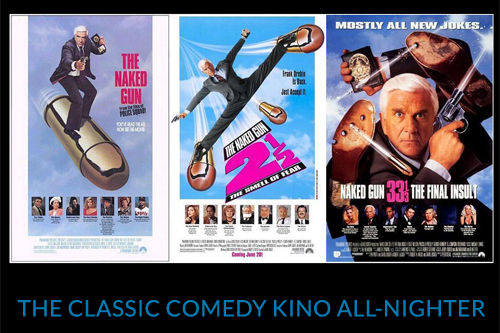 The Naked Gun 2 ½
(Digitally Remastered, OmU) Lieutenant Frank Drebin discovers that his ex-girlfriend's new lover is involved in a plot to kidnap a solar energy scientist.

The Naked Gun 33 ?
(Digitally Remastered, OmU) Frank Drebin comes out of retirement to help Police Squad infiltrate a gang of terrorists planning to detonate a bomb at the Academy Awards.

The Impossible Kid
(1982) - Digitally Remastered, OV SUPER RARE and super awesome exploitation comedy film starring Weng Weng. Weng Weng is a 00 agent for the Manila branch of Interpol. The Chief sends him in the pursuit of Mr X, an arch villain with a white sock on his head, who is holding the Philippines for ransom. Two businessmen, Maolo and Simeon, pay the demands but Weng Weng suspects foul play and goes deep undercover to reveal the identity of Mr X.

Spies-a-Go-Go
(1964) - Digitally Remastered, OV Russian spies secretly infect rabbits with a deadly bacteria, then let them loose in the U.S. Pillows, blankets, sleeping bags, and anything else to make you more comfortable in the kino is welcome!

Tickets: 23 Euro Pay Once, Come & Go As You Like. Films, Times, Guests Subject To Change. No returns, no refunds