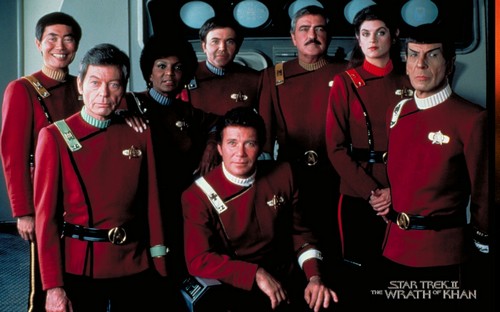 David DMP Moore and Babylon invite you on a journey across the galaxy with the original Star Trek crew to experience the ultimate Star Trek adventure:

FIVE of the greatest Star Trek movies ever made, back-to-back, in order, OmU, and Digitally Remastered!

Trek II: The Wrath of Khan (1982) With the assistance of the Enterprise crew, Admiral Kirk must stop an old nemesis, Khan Noonien Singh, from using the life-generating Genesis Device as the ultimate weapon.

Star Trek III: The Search for Spock (1984) Admiral Kirk and his bridge crew risk their careers stealing the decommissioned Enterprise to return to the restricted Genesis Planet to recover Spock's body.

Star Trek IV: The Voyage Home (1986) To save Earth from an alien probe, Admiral James T. Kirk and his fugitive crew go back in time to San Francisco in 1986 to retrieve the only beings who can communicate with it: humpback whales.

Star Trek V: The Final Frontier (1989) Captain Kirk and his crew must deal with Mr. Spock's long-lost half-brother who hijacks the Enterprise for an obsessive search for God at the center of the galaxy.

Star Trek VI: The Undiscovered Country (1991) On the eve of retirement, Kirk and McCoy are charged with assassinating the Klingon High Chancellor and imprisoned. The Enterprise crew must help them escape to thwart a conspiracy aimed at sabotaging the last best hope for peace.