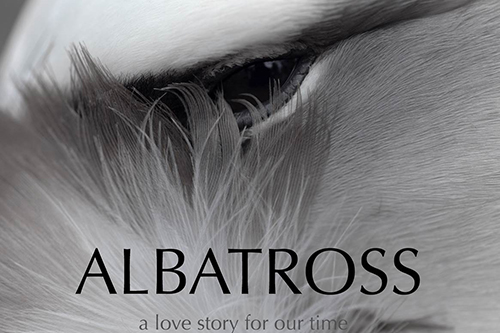 The Story of ALBATROSS
The Midway Project

The journey of ALBATROSS began in 2008 as a collaboration with my friend, activist/photographer Manuel Maqueda. Studying the newly-emerging issue of ocean plastic pollution, we learned of a stunning environmental tragedy taking place on a tiny atoll in the center of the vast North Pacific Ocean. We immediately began planning an expedition there, and on our first trip to Midway Island in September of 2009, we and our team photographed and filmed thousands of young albatrosses that lay dead on the ground, their stomachs filled with plastic. The experience was devastating, not only for what it meant for the suffering of the birds, but also for what it reflected back to us about the destructive power of our culture of mass consumption, and humanity's damaged relationship with the living world.

Chris Jordan is an internationally acclaimed artist whose work explores contemporary mass culture from multiple perspectives, connecting the viewer viscerally to the enormity and power of humanity’s collective unconscious. Edge-walking the lines between beauty and horror, abstraction and representation, the near and the far, the visible and the invisible, his works challenge us to look both inward and outward at the complex landscapes of our collective choices. His work reaches an increasingly broad audience through his exhibitions, books, website, interviews on radio and television, and speaking engagements and school visits all over the world. More about CJ and his work: https://www.chrisjordan.com/
manu team shot.jpg
Manuel Maqueda: Ocean Activist, Photographer, and Co-founder of the Midway Project

Manuel Maqueda is a multi-talented activist, artist, business consultant, teacher, and international Man of Mystery. He co-founded the Midway Project with Chris Jordan, joined the team on two of our trips to the island, and served as creative consultant and co-Producer for the project's duration. He also co-founded the Plastic Pollution Coalition, and founded a Spanish org called El Plastico Mata. Manuel is also an accomplished photographer, and on Trip 6 he captured the stunning photo featured in the film, of a parent albatross feeding shards of plastic to her chick.  plasticpollutioncoalition.org | https://elplasticomata.com