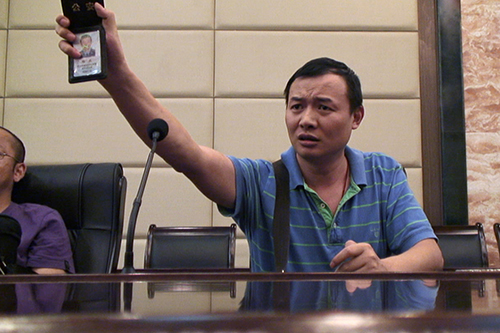 Activist Tan Zuoren was arrested for investigating the inordinate number of student deaths in the May 12, 2008 Wenchuan earthquake, and charged with “inciting subversion of state power.”

Ai Weiwei, who was also researching the situation, was invited to testify on Tan’s behalf. In Disturbing the Peace, when Ai and his colleagues travel to Chengdu, they are followed and filmed.

The harassment culminates in an early-hours police raid of Ai’s hotel room where he is beaten, detained at the hotel and prevented from attending the trial. When one of Ai’s colleagues Liu Yanping remains in detention several days later, Ai and his lawyer’s return to Chengdu to demand Liu’s release and accountability for the violence they have experienced. (OmeU)